In 1963, guitarist Nicolas Kasanda "Docteur Nico" and singer Tabu Ley "Rochereau" left Joseph Kabasele's African Jazz to form a new group, African Fiesta. Nico and Rochereau would soon split and go their separate ways. The bands of Docteur Nico, Tabu Ley and Franco (OK Jazz) were the at the very top of the music scene in Zaire in the 1960s.
In the 1970s, Tabu Ley and Franco went on to enjoy enormous sucess. Docteur Nico disappeared from the music scene due to a number of personal and professional downturns and disappointments.
In 1980, however, Docteur Nico, "le Dieu de la Guitare", reappeared on the stage in Kinshasa with Tabu Ley and his Afrisa International. Nico worked for a year or so with Tabu Ley. Our first song here is from an album SEIGNEUR TABU LEY ET L'AFRISA INTERNATIONAL : ROCHEREAU VOL. 4. 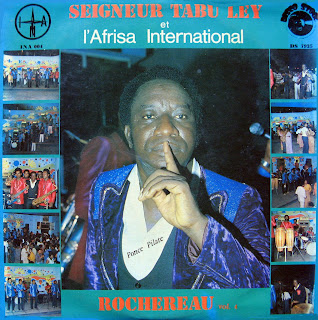 Docteur Nico is pictured prominently on the album's back side. 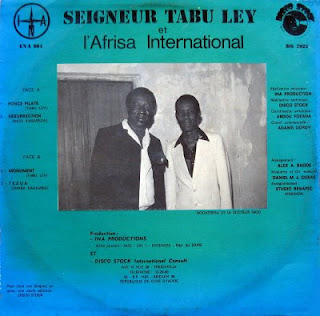 The first song in the file accessible below is, appropriately, RESURRECTION, penned by Nico Kasanda himself.
In 1981, Nico left Rochereau again to pursue and record music in his own direction.
He made a few records in Paris with saxophonist Empompo Loway and singer Vonga Aye, two of which are pictured here. 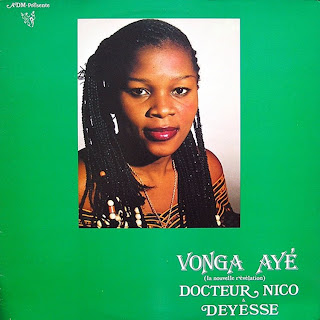 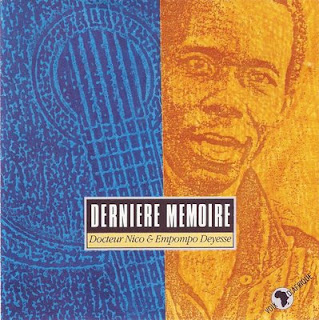 The songs presented here from these albums are SUKI SA from Vonga Aye's album and BONINGA from the other. Although the singer on SUKI SA is Mayos and not Vonga Aye, I have chosen this song because Nico's superb guitar skills are featured so well.
In 1982, Docteur Nico joined up with Les Redoutables of Abeti. Two years later, he recorded some songs in Brazzaville on the I.A.D. label. 34 ANS BA SOLOS ELEKI (IAD/S 0017) may be one of the albums produced at that time. 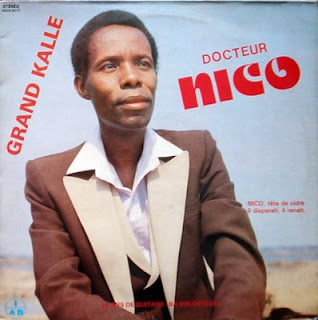 From this album, please listen to ADIKANDE, a truly wonderful track and one of my favorites from his later period.
In 1984, Dr. Nico recorded an interesting album on the Kina-Rama Selection label with Franck Lassan. It includes four songs, two extended rumbas and two rather quirky ballads that seem reminiscent of French cafe-style love songs. 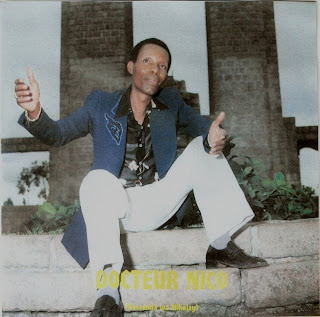 From this album, I have included one of the rumbas, VEMPOL.
Nico Kasanda went to Togo with his brother, rhythm guitarist Dechaud, in the mid-80s, making the album pictured below that includes the song LA VIE C'EST UN COMBAT, a song that unfortunately may be a snapshot into his own life. 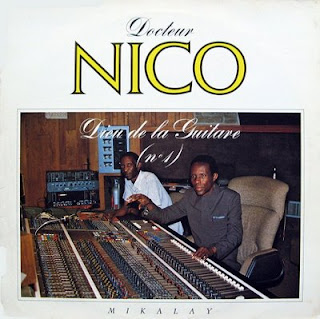 Nico continued to work with Les Redoutables, touring Africa, and eventually made a couple of albums in the United States. The albums pictured below, recorded in 1985, the year of his sudden and tragic passing, are among his last recordings. 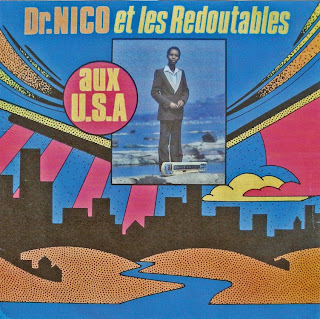 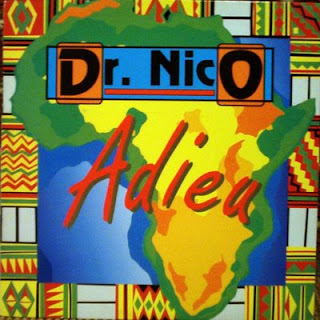 From AUX USA, we have AIMONS LES VIEUX and from his marvelous and appropriately named swan song, ADIEU, please listen to LA ROU QUI TOURNE. The wheel turns for us all. Docteur Nicolas Kasanda had a truly personal style that is instantly recognizeable to many. His work has influenced many and has been a major factor in my love for Congolese music.
Please download this file to hear the songs.
https://www.yousendit.com/download/Q01HRGx4Z1AxUUN4dnc9PQ
Your comments are always welcome.
Posted by DJ Daudi at 12:50 AM 7 comments: 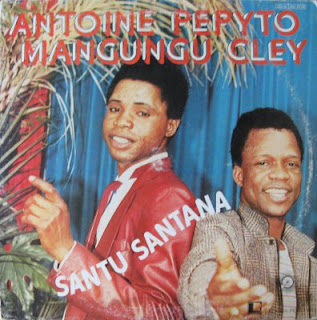 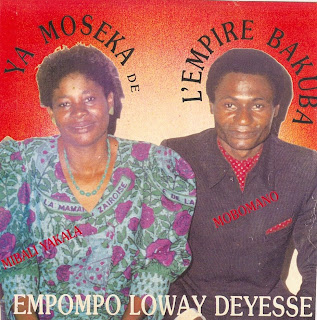 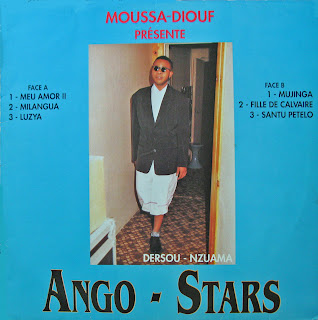 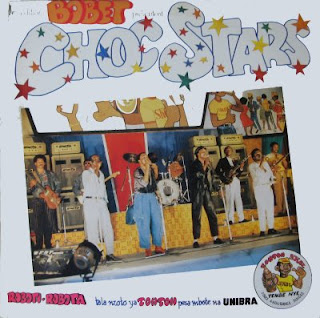 On the last program, I played the song DEVINEZ by Philo Kola. It can be found on an album called ELLE ME REND FOU on the Sacodis label. 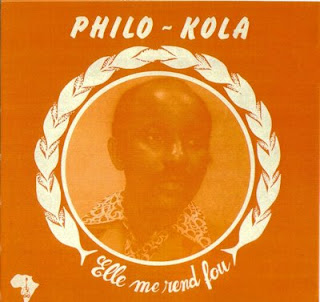 Sacodis was a very interesting label of Abidjan, Cote D'Ivoire. They produced LPs of African artists from Burkina Faso to Congo and the RDC. You could at one time find on the Sacodis label well known artists like Amadou Balake of Burkina Faso, Stan Tohon of Benin or Bazoumana Sissoko of Mali as well as Congolese greats. They also produced lesser known artists such as Compaore Issouf and Philo Kola.


The Congolese artists they produced recordings for were musicians working in a number of styles from classic rumba odemba to Paris-style soukous. Included in this post are a few of the albums that include the banner LASSISSI PRESENTE and the name of the artist or group. on the sleeve. "Lassissi" being Sacodis producer Aboudou Lassissi.


I have never seen Sacodis albums on CD, so check the bottom of this post for a link to download a song from each album pictured here, including the title cut from Philo Kola's album.

One of my favorites is LS 42, an album of OK Jazz musicians, called AMBIANCE A KASAVOUGOU VOL 1. On this record you hear great guitars and vocals with shoutouts for the guitarists and for saxman Matalanza. 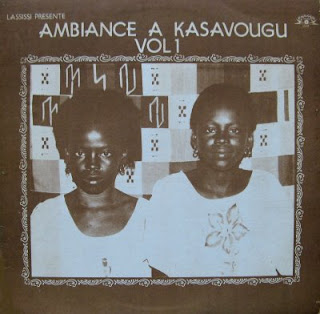 The song from this LP is MAVANGWA.

LS 45 features the early work of Minzoto Wella Wella, a fantastic album, this one with quirky vocals along with blazing guitars and horns, shows well that Sacodis was not averse to releasing records on the cutting edge. 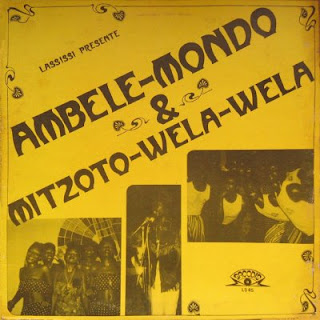 Download the file at the bottom to hear the original PINGULA.

Another OK Jazz veteran had a solo LP with LS 46, singer Celi Bitshou, his named spelled on this jacket in one of three or four ways I've seen it printed. This is a lovely rumba album. 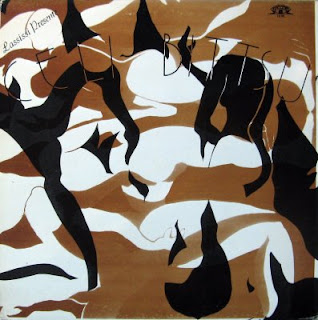 The song I've provided is, appropriately, a tribute song to LASSISSI.

Somewhere along the line, "Sacodis" changed to "Sacodisc International" and began to pick up Congolese music that was intentionally made for a more - as the label said - international audience.LS 100 and LS 102 are by singer Jean Baron and guitarist Dally Kimoko respectively.Both albums feature session musicians on the Paris scene in the early 80s from guitarists Diblo Dibala and Rigo Star to singers Aurlus Mabele, Ballou Canta and Wuta Mayi. 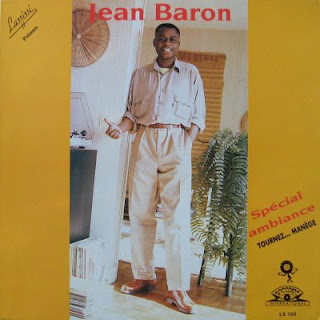 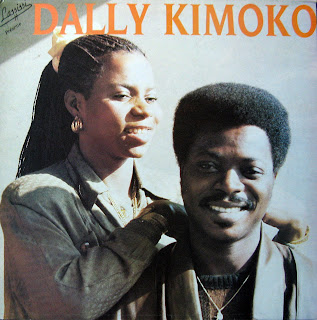 from Jean Baron, we have BATCHI and from Dally Kimoko we have SABINA.

Lassissi also produced albums under the Sacodis name on other labels like Shakara Music. One of these is an album recorded in Paris by rhythm guitarist Bopol Mansiamina. Bopol, along with Wuta Mayi, Nyboma Mwan Dido and Syran M'Benza, would go on to form the 4 Etoiles or Four Stars, a group that was instrumental in introducing Congolese music to a wider European and American audience. 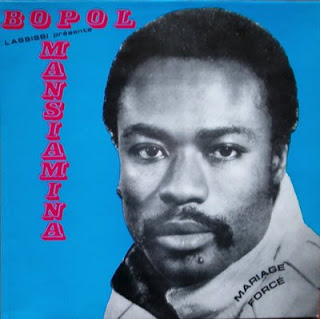 Our last song is Bopol's KALA YE NGANGU.
I hope that you will enjoy this little program! https://www.yousendit.com/download/Q01HTG15Tk1Qb0pFQlE9PQ

Listen live from 3:00-5:00 PM Eastern time USA.
http://wrir.org/x/modules/news/index.php?storytopic=41
To mark the passing of Wendo, the program will begin with one of his songs, but please listen in for lots more...from Franco to Stukas to Wenge El Paris to Werra Son and back to Wendo. I hope that within the variety of styles presented in this edition, you'll be able to hear consistancy as well!
I have a couple of requests to spin. Yours are welcome too.